9. Summary description of the project/service
a. Objective(s)

In 2010, SSTL entered into a second phase with the aim to expand the project which involved selecting more complex lanes, the inclusion of non-AEO companies, the expansion of risk management cooperation.

The joint administrative arrangement for Phase 3 of the SSTL Pilot Project was signed on 15 July 2016 at the headquarters of the World Customs Organizsation (WCO). In this pilot, the General Administration of China Customs and Hong Kong Customs join the customs authorities of eight EU Member States (Belgium, France, Germany, Hungary, Italy, Netherlands, Poland and Spain) and the Directorate-General for Taxation and Customs Union of the European Commission, DG TAXUD. Six additional Member States (Czech Republic, Greece, Lithuania, Portugal, Romania, Slovakia) as well as the WCO take part as observers.

Phase 3 will result in an increase in the share of goods traded between the participants covered by SSTL, and is thus expected to have a substantial impact on overall supply chain security and trade facilitation between the EU and China. This involves notably expanding the scope of the pilot, both geographically as well as to air and rail transport, in addition to maritime transport; increasing the volume of consignments covered; and incorporating advanced risk management techniques and developing common risk rules.

Furthermore, there is Risk management cooperation under the SSTL umbrella which allows addressing areas of mutual interest. So far several joint risk rule exercises have been conducted with focus on IPR, cigarettes and waste.

b. Business need for the project/service (background)

Due to the data exchange between exporting and importing customs authorities before container stuffing and container loading, the consignments operated under the SSTL pilot project should benefit from the intervention of the least possible customs in the logistical process.

Traders joining SSTL will enjoy quicker customs clearance with enhanced logistical processes and overall predictability of the availability of goods for final consumers. 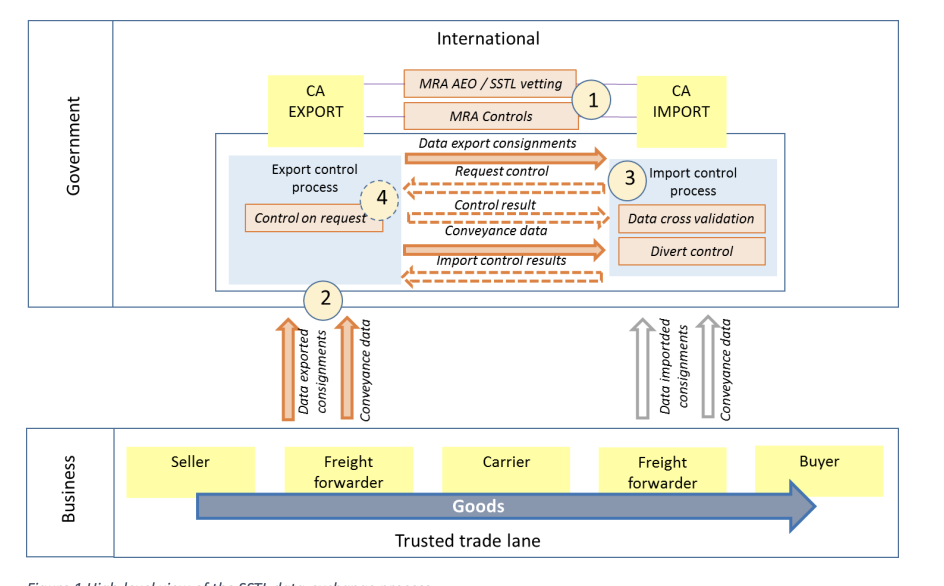 Benefits for SSTL consignments through faster customs clearance at import. Regarding import, SSTL is primarily focusing on the risk assessment for safety and security purposes, based on the Entry Summary Declaration that is lodged for goods brought into the customs territory of the Union (UCC, art. 127), and not e.g. on the risk assessment for customs duties when the goods are put into free circulation (UCC, art. 201). To achieve these objectives, export declaration and control result data as well as risk information is exchanged between the participating customs authorities. (